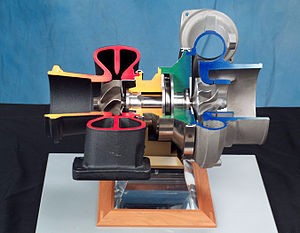 Forced induction dates from the late 19th century, when Gottlieb Daimler patented the technique of using a gear-driven pump to force air into an internal combustion engine in 1885.The turbocharger was invented by Swiss engineer Alfred Büchi (1879–1959), the head of diesel engine research at Gebrüder Sulzer (now called Sulzer), engine manufacturing company in Winterthur, who received a patent in 1905 for using a compressor driven by exhaust gases to force air into an internal combustion engine to increase power output, but it took another 20 years for the idea to come to fruition. During World War I French engineer Auguste Rateau fitted turbochargers to Renault engines powering various French fighters with some success. In 1918, General Electric engineer Sanford Alexander Moss attached a turbocharger to a V12 Liberty aircraft engine. The engine was tested at Pikes Peak in Colorado at 14,000 ft (4,300 m) to demonstrate that it could eliminate the power loss usually experienced in internal combustion engines as a result of reduced air pressure and density at high altitude.

Turbochargers were first used in production aircraft engines such as the Napier Lioness in the 1920s, although they were less common than engine-driven centrifugal superchargers. Ships and locomotives equipped with turbocharged diesel engines began appearing in the 1920s. Turbochargers were also used in aviation, most widely used by the United States. During World War II, notable examples of U.S. aircraft with turbochargers — which included mass-produced ones designed by General Electric for American aviation use — include the B-17 Flying Fortress, B-24 Liberator, P-38 Lightning, and P-47 Thunderbolt. The technology was also used in experimental fittings by a number of other manufacturers, notably a variety of experimental inline engine-powered Focke-Wulf Fw 190 prototype models, with some developments for their design coming from the DVL, a predecessor of today's DLR agency, but the need for advanced high-temperature metals in the turbine, that were not readily available for production purposes during wartime, kept them out of widespread use.

Turbochargers are commonly used on truck, car, train, aircraft, and construction equipment engines. They are most often used with Otto cycle and Diesel cycle internal combustion engines. They have also been found useful in automotive fuel cells

A turbocharger, or colloquially turbo, is a turbine-driven forced induction device that increases an internal combustion engine's efficiency and power output by forcing extra air into the combustion chamber.This improvement over a naturally aspirated engine's power output is due to the fact that the compressor can force more air—and proportionately more fuel—into the combustion chamber than atmospheric pressure (and for that matter, ram air intakes) alone.