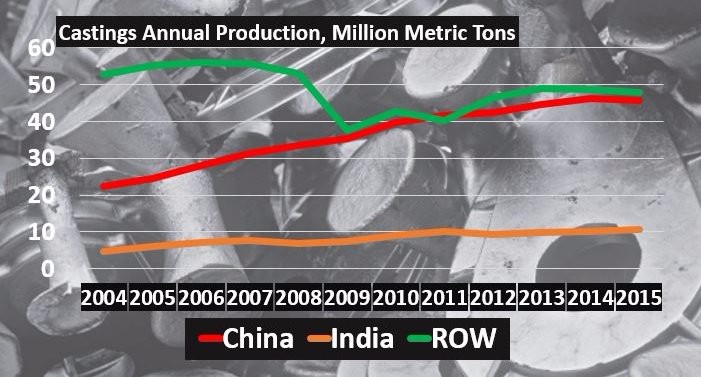 China has driven metal castings demand and production growth over the past decade, especially the iron casting, steel casting and non-ferrous metal casting, adding 22.5 Million MTPA of production from 2005 until 2016. China now accounts for about 45% of the world's castings production. But, as pointed out in my earlier article, castings production in China has now peaked. The immediate reason for peaking is the significantly slower growth in infrastructure spending.

The other powerhouse in metal castings production has been India, growing by 4.7 Million MTPA from 2005 until 20156. India now runs neck to neck in production with the USA, tied for second after China. Combined, China and India increased production in castings by almost 26 Million MTPA, while the Rest of the World (ROW) decreased by 7.5 Million MTPA. About 25% of the increased production of castings in India can be attributed to exports, the balance to domestic demand. The question many have now: Will India become the next China for castings demand and production? The answer: No.

India will not replicate China in metal castings demand growth for several reasons. Starting with the most obvious, economic growth in India will not replicate that of China's meteoric rise. While India is poised to now grow at 6 to 8% annually in nominal GDP, India will not see the multiple years of double digit GDP growth as has been the case in China. After adjusting for population growth, India's GDP per capita will hardly budge by 2025. The result is less demand growth in metal castings, simply due to a much slower economic growth.

Secondly, while the Government of India has bold ambitions to dramatically increase the role of manufacturing in the Indian economy, "Make In India", this is not likely to meet expectations. Services and consumers will continue to drive the Indian economy for at least the next decade, if not decades. Hence, manufacturing demand in India for castings will not approach that of China.

Thirdly, India will not duplicate China's infrastructure spending spree. China has financed their infrastructure spending via their use of Land Usage Rights -- leasing the property, practically all owned by the Government, and by massive amounts of debt. India doesn't have the ability of leasing huge amounts of government owned property, nor does India have the debt capacity of China. Also India's infrastructure is not in as bad of shape as most Westerns might believe. When managing the new operations in India for a major multinational company, I often had to explain India to newly minted Global business managers from America. Often these young managers made their first stop in l China, where they were amazed by the beautiful buildings, highways, and modern look. Then on their stop in India, I had the job to explain that India will always be a work in progress. It might not look pretty, but a free democratic economy builds infrastructure in an efficient manner, not wasting critical finances on empty apartments, half full airports, etc. India even today surpasses daily passenger train usage compared to China.

Also related to infrastructure, most Americans, maybe even Chinese, don't realize India is small in land mass only 1/3 the size of China, greatly reducing the infrastructure requirements overall. Additionally, while in much need of upgrading, there has been solid, infrastructure throughout India dating back to British rule. China's story has been one of Coastal Province development, followed by Westward infrastructure build out where little infrastructure had ever been in place.

Finally, from a demand side, India is developing at a time when technology is dramatically improving physical infrastructure efficiency. For example, ride sharing and home delivery already are having huge benefits to Indians. This to me will be the most fascinating aspect of Indian development, as Indians already show extraordinary capacity to creatively and cost effectively apply IT.

Tags : Metal castingsiron castingsteel castingnon-ferrous metal castingcasting production
Please feel free to give your inquiry in the form below. We will reply you in 24 hours.
News
Products