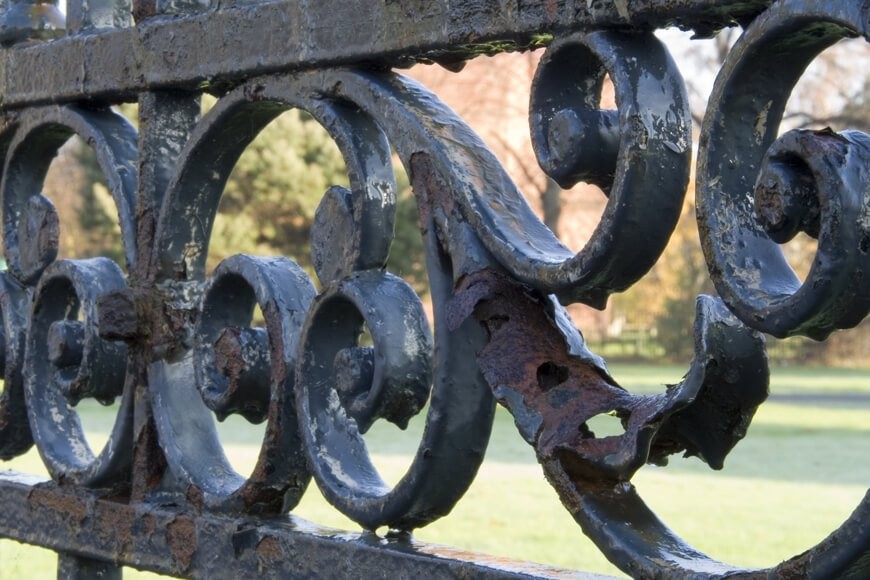 People often assume that cast iron and wrought iron are interchangeable terms for early iron work, but there is a world of difference.

Wrought Iron is iron that has been heated and then worked with tools.

Cast Iron is iron that has been melted, poured into a mold, and allowed to solidify.

The fundamental distinction between cast iron and wrought iron is in how they are produced.

The different methods of production create metals with varying strengths and weaknesses, which is why you rarely see a cast iron fence or a wrought iron frying pan.

WHAT IS WROUGHT IRON?

Wrought iron is composed primarily of elemental iron with small amounts (1–2 percent) of added slag (the by-product of iron ore smelting, generally consisting of a mixture of silicon, sulfur, phosphorous, and aluminum oxides). Wrought iron is made by repeatedly heating the material and working it with tools to deform it.

Wrought iron is highly malleable, allowing it to be heated, and re-heated, and worked into various shapes—wrought iron grows stronger the more it’s worked and is characterized by its fibrous appearance. Wrought iron contains less carbon than cast iron, making it softer and more ductile. It is also highly resistant to fatigue; if large amounts of pressure are applied, it will undergo a large amount of deformation before failing.

The term “wrought iron” is often misused today; it is commonly used to describe designs similar to historical wrought iron pieces—regardless of the metal used. Mild steel that has been machine-bent into shape in a cold state or cast steel and iron pieces that have been painted black are both regularly mislabelled as wrought iron work. To be truly designated as wrought iron, however, a metal piece must be forged by a blacksmith who heats it and hammers it into shape.

Wrought iron was used as early as 2000 BC in the Anatolian peninsula (now Turkey), and it was widely used in construction throughout the 19th century. Advancements in metallurgy in the 20th century, however, have made it easier and less expensive to machine-form and weld metal parts. The comparatively expensive and time-consuming nature of blacksmithing led to the end of its large scale commercial practice in the mid-1970s. This means that most true wrought-iron pieces today are either antiques or a specialty pieces that have been smithed by local artisans.

WHAT IS CAST IRON?

Cast iron can refer to a range of iron alloys, but it is most commonly associated with gray iron. Despite having the name iron, it isn’t pure elemental iron (Fe on the periodic table)—it’s actually an alloy containing 2–4 percent carbon, plus small amounts of silicon and manganese. Other impurities, such as sulfur and phosphorus, are also common.

Cast iron is formed by smelting iron ore, or melting pig iron (an intermediate product of iron ore extraction), and mixing it with scrap metals and other alloys. The liquid mixture is then poured into molds and allowed to cool and solidify.

The final result is strong but brittle. Due to the higher carbon content, cast iron solidifies as a heterogeneous alloy, meaning it contains multiple constituents, or materials in different phases, within its microstructure.

This mixed microstructure is what gives cast iron its distinctive physical properties. The internal carbon particles create internal stress points conducive to fracture. Cast iron is harder, more brittle, and less malleable than wrought iron. It cannot be bent, stretched, or hammered into shape, since its weak tensile strength means that it will fracture before it bends or distorts. It does, however, feature good compression strength.

Casting is significantly less labor-intensive than manufacturing wrought iron, and was a prominent form of production throughout the 18th and 19th centuries. The advent of steel and automated machining technologies have reduced the role of casting in some industries, but it remains a cost-effective and widely-used process in many others. While steel has almost entirely displaced cast iron in construction, cast iron remains popular for products with complex shapes that are easier to cast than machine to shape. Cast iron is less reactive with mold materials than steel, and has a lower melting point, making it more fluid.